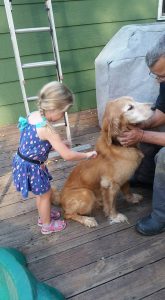 When Tanner came to us 5 years ago ( at age 7 ) we had our reservations. As part of the adoption process we were informed about all the potential problems with rescue dogs. We were informed that Tanner and his brother Hunter were rescued together but Tanner being in worse physical shape wasn't put up for adoption as early as Hunter. All of our fears and nightmares about what we were getting into were erased within the first 24 hours of his arrival. He brought with him his stuffed penguin and giant green stuffed pepper( 5 years later they are still in one piece) He was a perfect gentleman, well trained, and with no bad habits (Although we may have taught him a few). His only quirk was his obsession with tennis balls, he would sell his soul for someone to throw him a ball. We were so impressed with him when we got a follow up call to see how he was doing we said that if Hunter ever came up again for adoption we would take him in a minute. The caller said that Hunter's owners said the exact same thing. Sometime after that call we were informed that Hunter had passed away. It may have taken some time but they are together gain chasing tennis balls. It was a privilege to call him our dog for the last 6 years. We may not have raised Tanner from a pup, but this gentle kind boy will forever have a special place in our hearts. 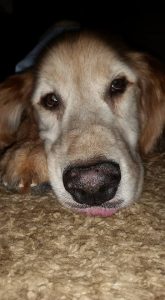