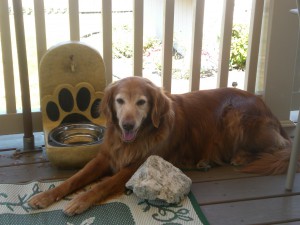 Milly was a puppy mill breeding dog from Missouri. She was red. She was beautiful. She was sweet. She was wonderful. She, along with her brother Bentley, was my life.

I had just lost my two beloved golden girls in 2007. I was driving around with Bentley, the survivor of my “three muttkateers”, crying about my loss and thinking about the dog coming into GRROWLS from Missouri. Milly was originally going to be fostered by a couple who went away for Christmas and I stepped up to foster her until they returned. As I was driving around crying with Bentley, I thought, “I will foster this dog, I will adopt her and I will name her Milly”. And that is what I did. My beloved Milly.

Milly was scared of everything. Absolutely everything she experienced was new to her and very frightening. It was imperative that she get used to going in the car but she was so scared. I used to literally drag her out to the car and put her in with Bentley. Then we headed for Burger King for burgers. It didn’t take her long at all to learn to love going into the car. She then went to school not for training but for the chaos she would experience there and the numbers of people and dogs. My trainer friend suggested I bring her even though she would not go on the floor to participate. She soon loved going there so much that she would run to the door when we got there.

I took her everywhere. That was my life, taking Milly and Bentley everywhere. I took them swimming and running in parks. She would swim out with Bentley and they would both turn in different directions after they retrieved their bumpers, making a perfect heart in the water which was just heartbreakingly beautiful. She went to nursing homes with Bentley, who was a therapy dog. She went to all GRROWLS events. She was so social. She loved going anywhere and everywhere. She would dress up in her party collars and trot into events with tail so high and wagging. Everyone loved her. Her coat was so silky after she lived with me for a while and was eating good quality food. Everyone would comment on how silky her coat was. What a site the two of them made. One so dark and one so light. So well behaved. She and Bentley were allowed to wait in a doctor’s waiting room when their “auntie” went to the doctor. Oh how she loved her auntie. She learned everything she knew from her brother Bentley. She depended on him totally and he was her leader. Until he wasn’t. Somewhere along the way, Milly became more sure of herself and would now go through doors first and get in the car first as long as she knew Bentley was near. She and Bentley were the “kissing dogs” raising money for GRROWLS.

She loved her uncle. She loved taking carrots from him which he would hold between his lips. She loved going to Tim Hortons for Tim Bits. She would hang out of the back window, almost falling out. The servers looked forward to her coming and would love her and give extra Tim Bits to her and Bentley so often telling me that they were their favorite dogs. On the way home from GRROWLS events she would sleep with her head resting on Bentley’s rump. I could go on and on. I miss her so much that sometimes it takes my breath away. I cry so much for her my sweet baby girl.

As Winnie the Pooh said “If there ever comes a day when we can’t be together keep me in your heart, I’ll stay there forever. I love you Milly. I always told you I would love you always and forever.