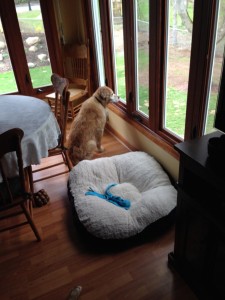 Buddy was given up in 2011 by an elderly lady who could no longer care for him. She and her husband had adopted him from a shelter in 2001, where his age was estimated at 3. Lee Stemmer adopted him, but, unfortunately, Lee passed away a few months later. Cindy and Skip Tollerup picked up Buddy when Lee went into the hospital on December 4, 2011, and adopted him soon after. Buddy’s trademark was his smile. He would pull his lips back and grin, his tail wagging all the time. He was an energetic dog who never let his age slow him down. He went to the Bridge on December 4, 2014, 3 years to the day after he came to the Tollerups. He is missed greatly.